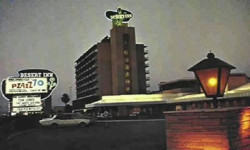 The woman in the conference room turned and he saw her in profile. She wore a brown blazer over a turtleneck sweater and her lighter brown skirt stopped just above her knees. They were very nice knees. He knew who those knees belonged to.

Granddaughter of a city pioneer. Daughter of a big-time, if shady, gambler. Miss Helldorado 1957. Champion horse jumper and barrel-racer. Major figure in the town’s social scene. Involved with all the local charities and causes. Two lucrative divorces behind her. Now married to the Casbah’s genius.

She hung up the phone and smiled at him. Heber smiled back. The pictures in the newspapers didn’t do her justice.

It’s hard to think of a better New Year’s gift than this pre-publication comment by L.A Times best-selling author, Robert Ellis: “Joey’s Place reads like a labor of love — Vegas style — with the weight of the world spinning round and round on a roulette wheel stacked with bullets. I couldn’t put it down.” Be sure and check out his author page at the link above.

Please add your name to my mailing list so that you’ll be the first to know when “Joey’s Place” is released. Happy New Year! 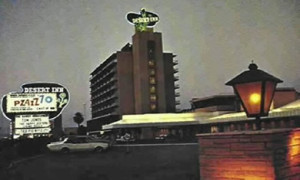 The old D.I. and other now-lost resorts play important roles in “Joey’s Place”

I am pleased to say that my Las Vegas crime novel, Joey’s Place, has been accepted by independent publisher, Moonshine Cove Publishing, with a scheduled release in early 2015. Moonshine Cove’s publisher, Gene D. Robinson, his editors, and I will be spending the next few months preparing revisions and planning promotions. When our final draft is completed we will be offering copies for review. The work will be available in multiple e-book formats as well as paperback.

View my previous posts for more information about this story of murder, deception, and justice in a Las Vegas that no longer exists…

It’s September, 1970. What happens in Vegas stays in Vegas because nobody gives a damn.  Then a man with two slugs in his head is discovered in the parking lot of the International Hotel & Casino, where Elvis is filling the house every night.  Bad for business.

Outcast Sheriff’s Detective Heber Parkins is mysteriously assigned the case. Soft-spoken and hard-headed, Heber usually collects the anonymous victims of the most anonymous town of them all — the waitresses and keno runners who met the wrong man, or the card mechanics and grifters who weren’t important enough for a deep hole in the desert and fifty pounds of quicklime. The kind of job you get when your partners keep getting themselves killed. But that’s all about to change, because the victim was co-owner of the most exclusive club on the Strip — Joey’s Place. 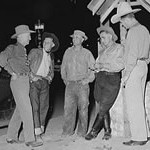 Chewing the fat on Fremont Street, circa 1940s

Some mystery authors are participating in a “blog hop” discussion that asks the following questions:

It’s a quick and informative way to meet new authors and learn about what they’ve done and what they’re up to. Below are my responses:

I’m outlining my next Las Vegas crime novel (tentatively titled “Landmark Kill”) while prepping its completed sequel, “Joey’s Place,” for e-publishing. The creative activity balances out the nuts & bolts process of attempting to uncover the (allegedly) best ways to offer and promote an e-book. I also just completed what I think will be the final revision of a short story, “The Car and Candice,” that will appear in an e-book anthology later this year titled “Saints and Sinners.” A previous version of the story is available in my collection, “L.A. Limo Tales,” available on Amazon.com. That collection is based upon my experiences as a limousine driver in Los Angeles in 1978-1979.

*How does my work differ from others of the same genre?*

Both crime novels are rooted in the old Las Vegas, before it became the industrial playground that it is today. “Joey’s Place” is set in 1970 and tells the story of an outcast sheriff’s detective who is mysteriously assigned to investigate the murder of a respected Mormon businessman who owned half of the most exclusive club on the Strip — Joey’s Place. Naturally, nothing is as it seems and everything plays out against the real-life struggle for control of Howard Hughes and his Nevada holdings. “Landmark Kill” will take place during approximately one week in September 1963. Like “Joey’s Place,” its protagonist will seek a killer and discover that much more lies beneath the surface. Unlike “Joey’s Place,” its protagonist will probably not be a detective but, instead, a down-at-the-heels private detective who is in way over his head.

I grew up in Las Vegas and was fortunate to meet some of the historical figures who appear in “Joey’s Place” and will appear in “Landmark Kill;” others inspired many of the fictional characters in the stories. These two novels are part of a planned series that works back through time and the town’s unique history. As for writing crime novels, they are what I most enjoy, particularly the classics by Hammett, Chander, Macdonald, and Spillane (to name a very few). My current favorites are Robert Ellis and his Lena Gamble series along with Robert Crais and Carl Hiassen.

*How does your writing process work?*

I use outlines and I am a student of John Truby and his concepts. Combined, this helps me avoid the loose ends and time-wasting tangents that seat-of-the-pants development usually produce (at least, in my case). Technically, my writer’s tool of choice is Scrivener, which gives me just about everything I need to sketch, plot, and write the complete work. It also makes it very easy to generate output in almost any format you can think of.

The inspiration for “Landmark Kill” came from reading about John F. Kennedy’s visits to Las Vegas before and after he became president. With all the conspiracy theories surrounding his death in Dallas, it gives me pleasure to add my own fictional theory to the mix. The essential key in this hybrid of crime and historical fiction is research research research. My background in history helps me there and I also benefit from a variety of resources, including some remarkable “old Las Vegas” groups on Facebook and Google+. As an example, I was curious as to the decor of the old Dunes hotel and was able to learn about it from one of the group members who worked there in the 1960s.

(Moderated comments are permitted on this post, so please feel free to join in the conversation.)