“L.A. LIMO TALES” is currently available as an e-book. This is a collection of short stories based upon my experiences as a limousine driver in 1978-79. Many people perceive the job of a chauffeur in L.A. as glamorous and exciting. As, Max, the jaded, somewhat misanthropic young man in these stories says, “They don’t know s**t. … Maybe it’s different now, but I doubt it. When I did it, it was airport pick-ups and drop-offs, catnapping in LAX terminals or the front seat, hanging around the car-barn waiting for a ride, idling in underground garage gas-chambers at some awards show, enduring the boring old f**ks who want to tell you what it was like to drive Jack Dempsey or Betty Grable or some other corpse nobody remembers, and long nights in parking lots behind some restaurant, arena, or concert hall. Very glamorous.”

If you’re looking for beginnings, middles, and ends, don’t bother. A driver lives a life of starts and stops, episodes and vignettes, and wrinkled suits, with very few happy endings. Take a ride through Los Angeles with Max in the days of posers, power-brokers, Peruvian “pep rallies,” and big-hair bands. 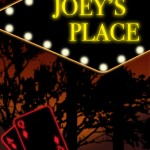 JOEY’S PLACE is a novel about an unknown Las Vegas. Not today’s fantasy factory, but the small town where I grew up.  When there was still open desert along the Strip, Frank and Dino ruled the showrooms, the casinos took care of their own problems, and the cops just picked up the pieces.  If they could find them.

JOEY’S PLACE is available in e-book on Amazon and will soon be available again as a paperback.

It’s September, 1970. What happens in Vegas stays in Vegas because nobody gives a damn. Then a man with two slugs in his head is discovered in the parking lot of the resort where Elvis is filling the showroom every night. Bad for business.

The case should go to the Sheriff’s elite Boulevard unit, but outcast Detective Heber Parkins mysteriously gets the call.  A soft-spoken, hard-headed “Jack” Mormon, Heber usually collects the anonymous victims of the most anonymous town of them all — the waitresses and keno runners who met the wrong man and the card mechanics and grifters who weren’t important enough for a deep hole in the desert and fifty pounds of quicklime.  The kind of job you get when your partners keep getting themselves killed.  But that’s all about to change.

Set against the backdrop of the violent struggle for control of Howard Hughes’s Nevada empire, JOEY’S PLACE is the first in a planned series that will portray this famously infamous town back to its days as a watering stop on the Old Spanish Trail. It will soon be available as an e-book.

In 2013, I was privileged to contribute the lead story for an anthology of thirteen very diverse short stories now available on Amazon.com. The address of the anthology’s website is http://13-anthology.webs.com/, and you can also follow it on Facebook at:
https://www.facebook.com/thethirteenproject