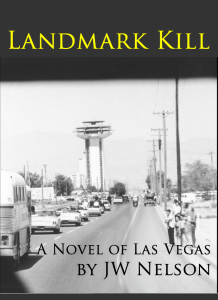 I just transferred the first “reader’s draft” of LANDMARK KILL to my wife’s Kindle. She’s an avid reader of all genres and probably the best editor imaginable for a first draft. Her contributions to JOEY’S PLACE are incalculable. If any of it works for her then I know I have something good started. After several months working on the story, letting it go is a bit unsettling. Still, every chick must leave the nest…

Set in September 1963, LANDMARK KILL is as much a thriller as it is a crime story. Like JOEY’S PLACE, it drills deep into the blood and bones of a lost Las Vegas, America’s famously infamous playground, and its ties to national politics. Det. Heber Parkins plays a major role in the story as the rough-edged, rookie partner of “cagey old Dave Fortuna,” but the main character is a jaded young gambler who’s drawn by chance into a many-layered murder mystery that traps him between the law and the Mob.

On the left is the “concept” cover for the book. Check back here or join my mailing list to be the first to know about publication dates.

Detective Heber Parkins is the Clark County Sheriff’s Department’s outcast, the lead man in its “leper colony,” the guy who collects the anonymous victims of the most anonymous town of them all, the “trash man.” Then he’s assigned to investigate the murder of the partner of the man who operates the classiest club on the Strip. Joey’s Place. Is he being set up to fail? Play the cat’s paw? He doesn’t care. It’s his first real case in years and it draws him into a struggle that will determine the future of Las Vegas.

I feel fortunate to have a roster of readers who not only enjoy crime fiction but also know a great deal about Las Vegas in September 1970. If you would like a review copy, please contact me at john@jwnelson.net